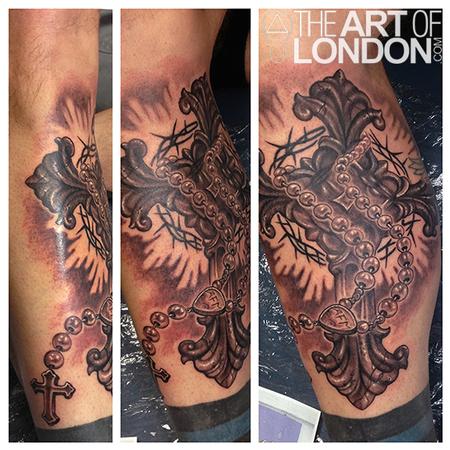 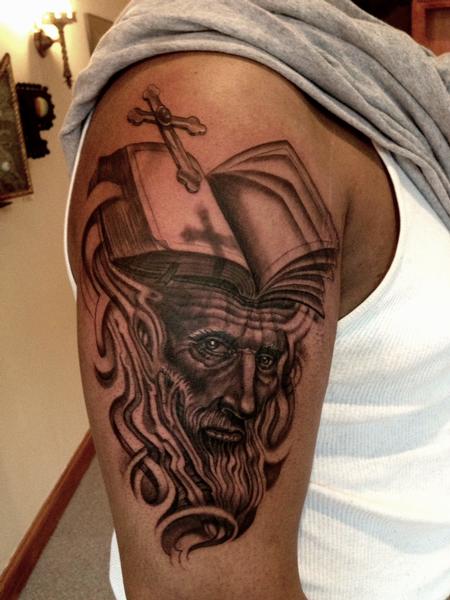 This client was interested in the enormity and beauty of randomized fractals. Itâs for a good reason, but I won't butcher her eloquent description of why she appreciates this art.Â

The challenge was to define the portal to the fractal world on her soft, curving form that allowed our eyes to find the continuity in a randomized fractal. The client and I were immediately sure that we did not want this piece to occupy the whole of her back, but we also knew that creating a narrow portal would diminish our chances of conveying the idea of fractals to the human eye. Without enough room to see the patterns unravel, I ran the risk of creating a hodgepodge of disorienting textures and values. Using a standard Julia fractal would be ideal given the narrow space through which to view the complex mathematical formations that define the art.

Once we've established the shape we realized that any if anything protruded in the top of the portal, it might mimic a Christian cross, which we did not want to happen, even accidentally.

Given that random fractals have to be seen on a large surface so that the human eye can find the patterns, I had to imagine that my canvas was more like 5' x 5'. I could not imagine designing a fractal from scratch, nor one of that scale, and certainly not one that was randomized enough to be understood out of my simple human hand. I'm sure it could be done: I know the artists who could do it. But not by me.

I instead drew the entire tattoo directly on her back with a marker, imagining the whole thing unfolding on the giant scale. The client and I spent many hours sketching, erasing, and resketching on her body with sharpies. It was very brave of her to stand there for hours with me, moving and dancing in front of the mirror to make sure it flowed with her female curves. We even made a little video so she could see how the silhouette of the piece would look on her form in motion.

She drove to my studio from a different state so we had to be economical and focused during our sessions. This rarely happens. She became a dear and trusted friend and a guide for my daughters and for me as a father. Ultimately, I should have paid her for the tattoo time for all the help and support she gave me.

I love this tattoo. I love the person wearing it. We discussed eventually giving her two full sleeves when her life allows for it. Given that she is a fantastic scholar and professor at a large university, I imagine this will simply extend our adventure for years to come and solidify our friendship.

No one can get you more qualified traffic

" Before commissioning TattooNow to build and host my website, I took on the daunting task of building my own sites and promoting myself through social media. When I finally came to my senses and put it in their hands, my business increased drastically and the site paid for itself in just a few short weeks. This was the start of branding myself in the body art world. My business cards, post cards and banner match my site style.
As a gallery and body art studio owner, I get solicitation calls from companies wanting to build a site or just host my existing site. I let them go through their sales pitch as I laugh on the inside. Then I show them the easy function of my site and I top off my moment with showing them how easy it is to update my site through the TattooNow interface and by showing them the countless features in the community. I send them away with their heads bowed as they cannot come close to comparing to what TattooNow offers specifically to artists. "

"I absolutely love the website that TattooNOW has done for me! With being a new shop owner and having a lot on my plate designing a webpage was one of the last things on my mind. TattooNOW was able to totally help me in designing my page and I receive compliments from my clients from it all the time! My shop is in a little remote town and over 50% of my clientele comes from this website! People come from all over the country to my little town in Missouri. It's amazing the power of the Internet these days. I don't know what I would've done without this website!!”

"I have been happily associated with TattooNow.com for many many years now and finally gave up control over myself built web site and had these experienced tattoo related web builders put together a kick ass new site. I am linked in with many of the popular networking sites like Instagram, Facebook and Twitter and even have several language translation options available for foreign countries. They make it easy to update the images and info yourself any time you feel the need and I could not be happier. I am already getting much more traffic to the site and I'm picking up more clients as well.  I would highly recommend them for anyone especially those in the Tattoo Industry. I will also be having them build a new site for my entire shop soon. Thank you so much TattooNow.com"